People make a big deal about love. And this is generally a good thing.

In the video below, Van Halen asks the question, “How do I know when it’s love?” and Sammy Hagar answers that he can’t say, but that it lasts forever. Then Eddie plays one of his most understated (and one of my favorite) guitar solos. Later, Sammy (who, incidentally, is wearing yellow stretch pants) goes on to elaborate that it’s something you feel together and that, when it happens, “nothing’s missing.”

It’s actually a really good performance, so you should check it out.

Though fans will forever be divided as to which flavor of Van Halen rocks more (Hagar or Roth), most people (except J Geils fans, who will tell you it stinks) will say that love rocks more than just about anything.

I have a beautiful girlfriend named Noriko. I love her very much – way more than I ever loved Van Halen. There are a lot of ways I could answer the question of how I know it’s love, but this time, I’m going to let the evidence speak for itself. 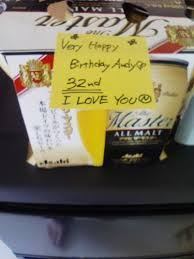 Today is my 32nd birthday. I’ve had a cold all week, and I had to work today. I came home tired and feeling like shit. This was the first thing I saw when I came inside. A six pack of my favorite beer sitting on the kitchen counter. Two cans had been removed from the box and placed in the fridge for my refreshment.

As if that weren’t enough to turn my frown upside-down, when I opened the freezer, I saw a stack of my favorite ice cream bars.

Proof positive that Noriko loves me.

There are a lot of small things I love about Noriko. Some big things too. We’ll be getting married in two days, so it’s pretty exciting around here lately.

And I think I can do better than Sammy Hagar (certainly with regards to my choice of pants) when it comes to the question of knowing when it’s love. You’ll know when you don’t have to ask anymore. It’ll be right there for everyone to see – on the kitchen counter, in the freezer, everywhere.

Clay Collins is a savvy dude, and I’ve learned a LOT from him over the past few years. One of my favorites is this little nugget: The greatest skill in business is the ability to feel into a situation and do what needs to be done to make... Continue →